Start Your Journey to Financial Success

2Domestic ATM withdrawal fees incurred during Qualification Cycle in which qualifications were met will be reimbursed and credited to account on the last day of Monthly Statement Cycle.

3Restrictions apply. Choice™ Checking begins with a $10.50 base service charge monthly fee that can be reduced or eliminated. The fee is reduced by $1.00 each Qualification Cycle for receiving electronic statements. The fee is reduced by $0.20 each time you use your debit card to make a signature-based purchase during the Qualification Cycle (purchase must be $5 or more; ATM and PIN based transactions are excluded). See the Rates & Fees page here.

†Overdraft Fee Forgiveness applies only to fees charged for overdraft and Courtesy Pay and is granted upon request on an annual basis. Any amounts for Relationship Fee Refunds received in 2020 will count toward the annual limit of $40.

5APR based on creditworthiness. Rates are subject to change. APR will vary and will be calculated based on the Wall Street Journal Prime Rate and may go up to a maximum of 18.00%. Minimum payment is 2% of total new balance or $18.00, whichever is greater. Cash advance fee is $10 or 2.00% of the amount of each cash advance, whichever is greater. No balance transfer fees. Additional limitations, terms and conditions may apply. View the Rewards Guide to Benefits.

‡APR = Annual Percentage Rate. Must be 21 years or older to apply. Introductory APR only applicable to new credit card applications. 0.00% Introductory APR for 6 months from issuance of the card. After the introductory period, APR will be adjusted based on creditworthiness. Rates are variable and subject to change and will be calculated based on the Wall Street Journal Prime Rate and may go up to a maximum of 18.00%. Minimum payment is 2% of total new balance or $18.00, whichever is greater. Cash advance fee is $10 or 2.00% of the amount of each cash advance, whichever is greater. No balance transfer fees. Additional limitations, terms and conditions may apply. Equal Opportunity Lender. View the Platinum Credit Card Disclosure and the Guide to Benefits.

Ready to join the Neighborhood?

Find out if you're eligible

Despite popular belief, becoming a member of a credit union is a lot easier than you might think. Click the "Eligibility" button to see all the ways you can be eligible.
Eligibility
Close 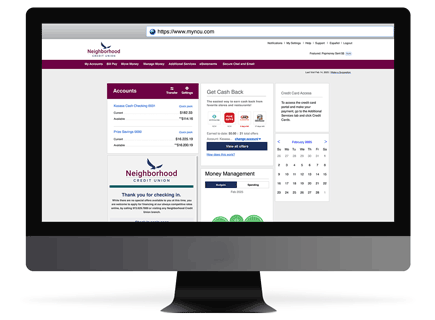 The Allpoint ATM Network allows our members the ability to withdraw cash at over 50,000 ATMs nationwide without charging an ATM fee.
FIND AN ATM

Easily access your accounts with over 6,100 nationwide Co-Op locations from which to do deposits and withdrawals in the lobby.
FIND A SHARED BRANCH

Protect your checking account with overdraft protection! Opt-in for the Courtesy Pay privilege for ATM and debit transactions.
LEARN MORE

Why Join a Credit Union

We are a not-for-profit owned and governed by the members.
Not only are our members a part of our community, they are stakeholders of the credit union and are key players to how we operate.
Credit Unions offer better rates than the big banks.
Credit Unions are different because our goal is not to make a profit from our customers. We are in the business of helping people achieve their short and long-term financial goals for their families as well as help them live a life of financial freedom.
Earnings are returned to you, the members, in the form of great rates and lower fees.
We’re not like banks where the profits go straight into the pockets of shareholders. Our earnings go straight back to you in the form of better rates, dividends, and lower fees.
Be a part of a community where you’re not just an account number.
Through unique products and community investment, including college scholarships and financial education, Neighborhood Credit Union helps its North Texas neighbors improve their financial health and well-being.